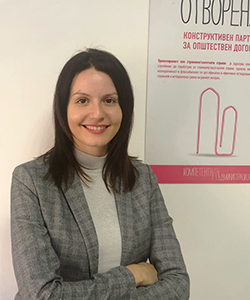 Ana Jankuloska holds a master degree in Human Rights and Democracy at the Faculty of Law "Istinuianus Primus" in Skopje, with a Master's thesis on "Freedom of Religion, Contemporary Experiences and Tendencies"

In terms of professional experience, Ana has been involved in the NGO sector since 2009, primary as a volunteer, later she was engaged professionally. She has always been a supporter of Civil society organizations that are fighting for better society. Often she had been involved in NGO’s activities and events. After completing her master's degree she was working as an event and concert organizer and PR manager. Further on she had been working as a legal adviser in a trade union where she requires knowledge about trade unionism, labor rights, youth issues, social justice, social dialogue and more, where she gained rich practical experience.

In the meantime she has participated in many trainings, youth exchanges and programs, mainly provided by Erasmus plus program. Also she has been a Macedonian youth representative of numerous conferences organized by International Labor Organization, European Youth Center and European Council. She has participated in many study visits where she practically get familiar with the functioning of the European Union and has obtained numerous certificates, including the certificate of youth leader.

Subjects of her private and professional interests are human rights, social protection, gender equality, environmental awareness, multiculturalism and anti-discrimination. She has been a long-time activist and advocate for stray animals’welfare and adoption. She speaks English fluently and uses Spanish language in non-formal communication.

She is currently engaged in the Center for Change Management as a Project Assistant of the project for Development of micro-enterprises owned by women in the cross-border region.